I had no idea that you were such an elegant and sophisticated city. Rife with history, culture and natural beauty, you gave us plenty to explore during a recent weekend.

We were thrilled to discover your culinary gems, such as the Mercado Da Ribeira, an amazing amalgamation of a historical fruit, veggie, fish, meat and cheese market combined with a hip food court. The bounty from the area was eye popping, with gleaming fresh fish, roast suckling pig and even snails trying to escape their net bags.

The food court was created by Timeout Publications and offers everything from sushi to pizza, tartare from a Michelin-starred chef and some of the best Portuguese hams and cured meats to be found anywhere. It was here we were almost brought to tears by warm, luscious pasteis de nada, the country’s infamous custard tarts.

The National Tile Museum, housed in a 16th century convent, was surprising in its offerings with unbelievably colorful tiles from the 14th century on up as well as a couple of jaw-dropping, gilt encrusted chapels filled with relics and paintings. One of the highlights is a mural of Lisbon done in tiles which shows the city in all its glory before the 1755 earthquake that wiped out large parts of it. 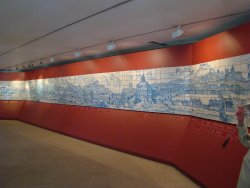 We loved this detail of another mural that depicts a glamorous chicken being taken to a ball in a colorful carriage. Chickens hold a warm place in the hearts of Lisboetas because

in Lisbon, there is a piri piri  shop on virtually every corner. The inhabitants of this great city love to get their chicken fix and one of the best outposts is in the Campo de Ourique neighborhood.

Step inside and smell the delicious aromas of birds that have been bathed in a sauce of hot chilies originally brought from Africa. Piri piri sauce is a marinade for chicken as well as a bottled sauce that is ubiquitous here and used to fire up everything from soup to eggs. Every cafe, diner and restaurant makes their own and the flavors and textures vary as much as the people who make up this hilly town.

We happened upon this fantastic chicken place on a walking food tour with Culinary Backstreets. In 6 hours we ate and drank our way around this out-of-the-tourist-fray district, trying traditional cherry liqueur called ginjinha, fish stew, bacalhau (another national dish made from salt cod) that is fried into tasty croquettes, pork vindaloo, cheeses and cured meats all washed down with fabulous (and underrated) red wines from the countryside.

Another reason I fell in love with you, dear Lisbon, is because you are much like my home city of San Francisco. Your hilly streets are also navigated by rickety cable cars, and then used to make a toast to you and your version of the Golden Gate Bridge.

I’ll be back to visit again, there is still way too much to see and taste to be away too long. Until then, dear Lisbon, keep singing your hip-swinging songs, painting your beautiful tiles and cooking up delicious traditions.