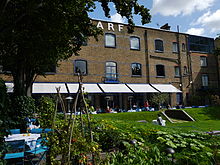 The River Cafe is a classic that has withstood the test of time by championing a seasonal manifesto, serving top quality ingredients and having great leadership at the top.

It was originally opened in 1987 by Ruth Rogers and Rose Gray as the employee cafe for Rogers’ husband’s architectural practice. The location was an old oil storage facility right on the river Thames that was turned into a handsome office building with the restaurant at its heart.

A courtyard faces the river with dining tables for al fresco eating during nice weather surrounded by garden boxes filled with herbs, vegetables and fruit trees. It’s quite an idyllic spot.

Many now-famous chefs have honed their culinary chops under the tutelage of Gray and Rogers including Jamie Oliver, Hugh Fearnsley-Whittingstall and April Bloomfield, to name just a few. Gray passed away in 2010, but Rogers carries on the foundations they started together. The restaurant remains dedicated to Italian cuisine in all its simplicity, from fresh homemade pasta to whole fish roasted in the watermelon pink wood oven that’s finished with a drizzle of good olive oil and a squirt of fresh lemon.

The wood oven anchors the space and many of the standard dishes the restaurant is known are cooked in it – such as that whole roasted fish. But the kitchen is proficient at bringing optimum flavor out of seasonal ingredients and uses many techniques to achieve that.

One example was a starter of creamy burrata, juicy, roasted cherry tomatoes, cracked olives and wilted swiss chard that hit sweet, bitter, salty and creamy on the taste buds. A drizzle of olive oil pulled it all together. Another starter of chargrilled squid was topped with a tiny dice of spicy red pepper so the elements of chewy ocean interplayed with a piquant heat. Lemon, olive oil and a pile of raw autumn leaves completed the dish.

The mains were also examples of simple ingredients brought to the peak of flavor. The kitchen was using many varieties of chicories, both raw and cooked. The bitter bite of  treviso alongside a pan roasted loin of monkfish accentuated the buttery moist fish. Slices of rosy lamb were accompanied by cicoria which contrasted with the meat and a luscious, wood roasted artichoke. A refreshing minty garlic sauce snapped it all to attention. A plate of homemade ravioli stuffed with girolles mushrooms and cheese was the weakest link of the meal, not because it wasn’t done well but more because it seemed boring compared with the flashes of brilliance and color on the other plates. 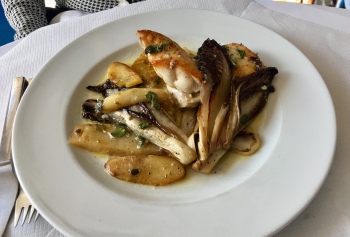 Prices are high but I would say you get what you pay for. The chance to enjoy a fantastic meal at this gorgeous place that is still going strong after 31 years was worth every pound.